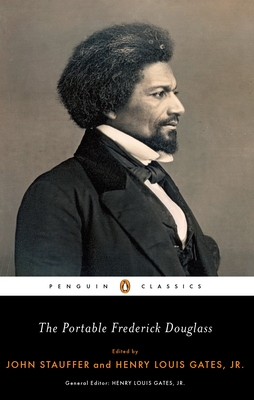 A new collection of the seminal writings and speeches of a legendary writer, orator, and civil rights leader

This compact volume offers a full course on the remarkable, diverse career of Frederick Douglass, letting us hear once more a necessary historical figure whose guiding voice is needed now as urgently as ever. Edited by renowned scholar Henry Louis Gates, Jr., and Pulitzer Prize–nominated historian John Stauffer, The Portable Frederick Douglass includes the full range of Douglass’s works: the complete Narrative of the Life of Frederick Douglass, as well as extracts from My Bondage and My Freedom and Life and Times of Frederick Douglass; The Heroic Slave, one of the first works of African American fiction; the brilliant speeches that launched his political career and that constitute the greatest oratory of the Civil War era; and his journalism, which ranges from cultural and political critique (including his early support for women’s equality) to law, history, philosophy, literature, art, and international affairs, including a never-before-published essay on Haitian revolutionary Toussaint L’Ouverture.

The Portable Frederick Douglass is the latest addition in a series of African American classics curated by Henry Louis Gates, Jr. First published in 2008, the series reflects a selection of great works of fiction, nonfiction, and poetry by African and African American authors introduced and annotated by leading scholars and acclaimed writers in new or updated editions for Penguin Classics. In his series essay, “What Is an African American Classic?” Gates provides a broader view of the canon of classics of African American literature available from Penguin Classics and beyond. Gates writes, “These texts reveal the human universal through the African American particular: all true art, all classics do this; this is what ‘art’ is, a revelation of that which makes each of us sublimely human, rendered in the minute details of the actions and thoughts and feelings of a compelling character embedded in a time and place.”

John Stauffer (editor) is a professor of literature and African American studies and chair of the History of American Civilization program at Harvard. His eight books include The Black Hearts of Men: Radical Abolitionists and the Transformation of Race, Giants: The Parallel Lives of Frederick Douglass and Abraham Lincoln, and State of Jones, which was nominated for the Pulitzer Prize.

“indispensable (…) a timelessly rewarding read in its totality”
—Maria Popova