The Ramayana: A Shortened Modern Prose Version of the Indian Epic (Paperback) 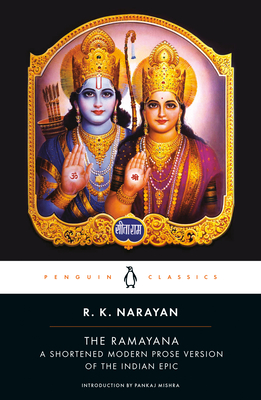 The greatest Indian epic, one of the world's supreme masterpieces of storytelling

A sweeping tale of abduction, battle, and courtship played out in a universe of deities and demons, The Ramayana is familiar to virtually every Indian. Although the Sanskrit original was composed by Valmiki around the fourth century BC, poets have produced countless versions in different languages. Here, drawing on the work of an eleventh-century poet called Kamban, Narayan employs the skills of a master novelist to re-create the excitement he found in the original. A luminous saga made accessible to new generations of readers, The Ramayana can be enjoyed for its spiritual wisdom, or as a thrilling tale of ancient conflict.

R. K. Narayan (1906–2001), born and educated in India, was the author of fourteen novels, numerous short stories and essays, a memoir, and three retold myths. His work, championed by Graham Greene, who became a close friend, was often compared to that of Dickens, Chekhov, Faulkner, and Flannery O'Connor, among others.