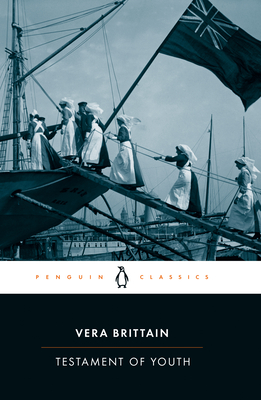 Vera Brittain grew up, got into Oxford, fell in love, and then World War One began. So she dropped out of Oxford, trained as a nurse, and she went to war. I read this memoir in the wake of the 2016 election, and it was exactly what I needed - this is the perfect depiction of what it’s like to live in a time of calamity when you’ve believed in the easy promises of your life up until now, and what it’s like to keep going when you fear that the thread of meaning has resolutely frayed. Give this to the proto-revolutionaries in your life, woke and thoughtful women, progressives gearing up for the battle.

Much of what we know and feel about the First World War we owe to Vera Brittain’s elegiac yet unsparing book, which set a standard for memoirists from Martha Gellhorn to Lillian Hellman. Abandoning her studies at Oxford in 1915 to enlist as a nurse in the armed services, Brittain served in London, in Malta, and on the Western Front. By war’s end she had lost virtually everyone she loved. Testament of Youth is both a record of what she lived through and an elegy for a vanished generation. Hailed by the Times Literary Suplement as a book that helped "both form and define the mood of its time," it speaks to any generation that has been irrevocably changed by war.

This edition features a new introduction by Brittain's biographer examining her struggles to write about her experiences and the book's reception in England and America.

Vera Brittain (1893–1970) served as a nurse in the British armed forces in World War I and afterward devoted herself to the causes of peace and feminism. She wrote twenty-nine books, of which Testament of Youth is the best-known.

Mark Bostridge is a biographer and literary critic who lives in London.

“[Testament of Youth] remains one of the most powerful and widely read war memoirs of all time.” —The Guardian (London)