Winter According to Humphrey (Paperback) 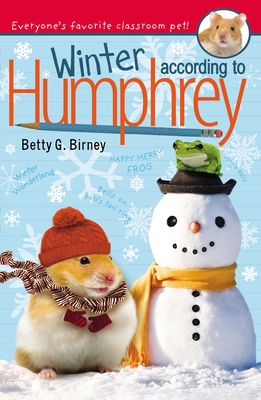 This is book number 9 in the Humphrey series.

The holidays are coming and Humphrey is unsqueakably excited. He loves to hear about all the different ways his friends in Room 26 celebrate and to watch them make costumes and learn songs for the Winter Wonderland pageant. (He even squeaks along!)

But with so much to do, will the holidays go according to plan? Do-It-Now-Daniel is having trouble practicing, Helpful-Holly can’t stop worrying about making presents for her friends, and Humphrey still has to find a gift for Og! Good thing Humphrey is one smart hamster who can help them all fill the season with JOY-JOY-JOY!

Nominated for twenty-four state awards and the winner of seven, the Humphrey series is a hit across the country. And he's a One School, One Book favorite!

Betty G. Birney has won many awards for writing for television, including an Emmy, three Humanitas Prizes, and a Writers Guild of America Award, and she won the Christopher Award for Friendship According to Humphrey. In addition to the Humphrey series, she is the author of The Seven Wonders of Sassafrass Springs and The Princess and the Peabody's. She grew up in St. Louis, Missouri, where her parents grew up as neighbors on Humphrey Street. Her website, bettybirney.com, is full of fun Humphrey activities and information.

“Humphrey, a delightful, irresistible character, is big hearted, observant, and creative.” —Booklist on The World According to Humphrey

“Humphrey is a witty, fun, and lovable character with great kid appeal.” —School Library Journal on Surprises According to Humphrey

“This thoughtful yet upbeat tale lends credence to the notion that actions and intentions can be misinterpreted while pointing out the benefits of looking at a situation from another’s point of view. Readers will find that seeing the world from Humphrey’s standpoint is mighty satisfying.” —Kirkus Reviews on Friendship According to Humphrey

“Narrated in Humphrey’s lively voice, the story is characteristically amusing and incorporates kid-relevant issues, such as being the last chosen for sports teams and the importance of respect, support, kindness, and appreciation. New and returning readers will enjoy the caring hamster’s unique perspective on everything from friendship to fire drills.” —Booklist on Surprises According to Humphrey