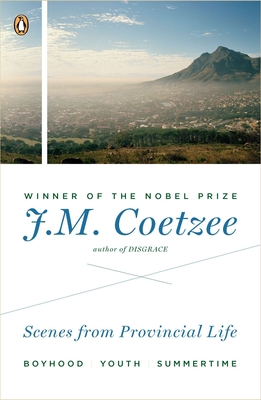 The Nobel Prize–winning author's brilliant trilogy of fictionalized memoirs—now available in one volume for the first time.

Few writers have won as much critical acclaim and as many admirers in the literary world as J. M. Coetzee. Yet the celebrated author rarely spoke of himself until the 1997 arrival of Boyhood, a masterly and evocative tale of a young writer's beginnings. Continuing with the fiercely tender Youth and the innovative Summertime, Scenes from Provincial Life is a heartbreaking and often very funny portrait of the artist by one of the world's greatest writers.

“Many, this reviewer among them, would consider [Coetzee] the greatest living novelist in English.” — The New York Times Book Review

“It’s a mark of Mr. Coetzee’s power as a storyteller that he makes a compelling, indeed, racing, narrative out of these hidden wheels within wheels.” — The New York Times

“South Africa’s most brilliant novelist . . . challenges us to doubt our preconceived notions not only of love but of truth itself.” — The Seattle times

“Coetzee portrays his younger self as scrawny and pretentious, but even if this insistent humility is just another form of self-aggrandizement, the result is enthralling” — Entertainment Weekly (an A rating)

"A delight to read: It will make you angry, amused, scornful and sympathetic by turns.” — San Francisco Chronicle