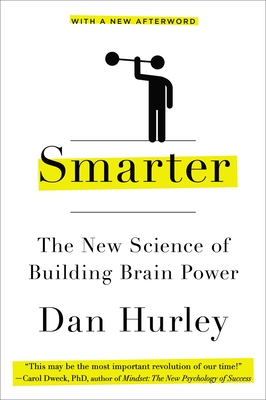 “A riveting look at the birth of a new science.” —Daniel H. Pink, author of Drive

When he was eight years old, Dan Hurley was labeled a “slow learner” because he still couldn’t read.  Three years later, he had become a straight A student.

Until the publication of a major study in 2008, psychologists believed that intelligence is fixed at birth, that IQ is like a number tattooed on the soul. The new study showed that people can increase their “fluid” intelligence through training.

Hurley, who grew up to become an award-winning science journalist, first explored the topic in The New York Times Magazine. In Smarter, he digs deeper by meeting with the field’s leading researchers—and becoming a human guinea pig. After just three months of playing computer brain-training games, joining a boot-camp exercise program, learning to play the Renaissance lute, practicing mindfulness meditation and and even getting his brain zapped in the name of science, Hurley improved his fluid intelligence by sixteen percent.

With humor and heart, Smarter chronicles the roiling field of intelligence research and delivers practical findings to sharpen the minds of children, young adults, seniors, and those with cognitive challenges.

Dan Hurley is the featured journalist in PBS’s August 2013 Pledge Special, “Smarter Brains.” His articles on intelligence research have been featured in the New York Times Magazine, the Washington Post, Neurology Today, and Discover magazine. He lectures to corporate and academic audiences across the United States. His fluid intelligence went up 16 percent after his training regimen.

"Smarter is an essential read. It's a riveting look at the birth of a new science as well as a user’s manual for anyone who wants to be better at solving problems, learning new things, and coming up with creative ideas."
—Daniel H. Pink, author of Drive and A Whole New Mind

"Chatty and personal, Smarter is an easy read—even for those of us with untrained brains."
—The Washington Post

“Hurley captures the history and mystery of intelligence, but, most of all, the exciting new science of intellectual growth. This may be the most important revolution of our time!”
—Carol Dweck, Author of Mindset: The New Psychology of Success

"Dan Hurley isolates just what cognitive exercise boosts intelligence.  Anyone who doubts that environment can make a real difference to cognition should start with this book."
—James R. Flynn author of What is Intelligence

“Filled with beautifully explained science, Smarter is engaging and inspiring, offering much-needed hope to those of us whose smarts seem to be declining. Smarter, in fact, is that rare thing: enjoyable reading that can also improve your life.”
—Gretchen Reynolds, author of The First 20 Minutes