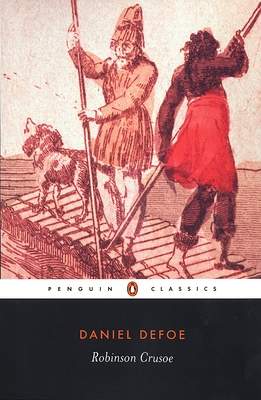 The original tale of a castaway struggling to survive on a remote desert island, and one of the first novels in English

The sole survivor of a shipwreck, Robinson Crusoe is washed up on a desert island. In his journal he chronicles his daily battle to stay alive, as he conquers isolation, fashions shelter and clothes, enlists the help of a native islander who he names 'Friday', and fights off cannibals and mutineers. Written in an age of exploration and enterprise, it has been variously interpreted as an embodiment of British imperialist values, as a portrayal of 'natural man', or as a moral fable. But above all is a brilliant narrative, depicting Crusoe's transformation from terrified survivor to self-sufficient master of an island. This edition contains a full chronology of Defoe's life and times, explanatory notes, glossary and a critical introduction discussing Robinson Crusoe as a pioneering work of modern psychological realism.

Daniel Defoe (1660-1731) had a variety of careers including merchant, soldier, secret agent, and political pamphleteer. He wrote on economics, history, biography and crime but is best remembered for his fiction, which includes Robinson Crusoe (1719), Moll Flanders (1722) and Roxana (1724).

John Richetti is Professor of English at the University of Pennsylvania. He is an expert of 18th-century literature and has published widely on the subject.

“Beyond the end of Robinson Crusoe is a new world of fiction. Even though it did not know itself to be a ‘novel,’ and even though there were books that we might now call ‘novels’ published before it, Robinson Crusoe has made itself into a prototype . . . Perhaps because of all the novels that we have read . . . the novelty of Defoe’s fiction is the more striking when we return to it. Here it is, at the beginning of things, with its final word reaching out into the future.” –from the Introduction by John Mullan