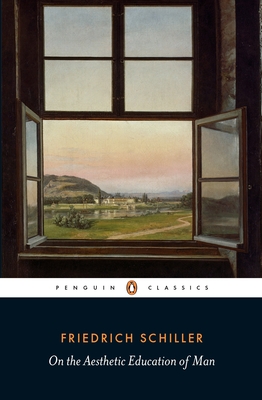 “The artist is certainly the child of his age, but all the worse for him if he is at the same time its pupil, even worse its minion.”

One of the most profound works of German philosophy, Friedrich Schiller’s On the Aesthetic Education of Man examines politics, revolution, and the history of ideas in order argue that art should have a greater role in shaping society. Deeply disillusioned with the course of the French Revolution, Schiller expressed his complaints in a series of letters to a patron, an impassioned attempt to drag mankind upward from failure to greatness by placing ideas of aesthetic education at the heart of the human experience: “Our era has actually taken both wrong turnings, and has fallen prey to coarseness on the one path, lethargy and perversity on the other. Having strayed along both paths, it is beauty that can lead [us] back.”

One of Germany’s greatest political statements from a time of revolutionary change, Schiller’s arguments are as arresting, challenging, and inspiring today as when they were first written.

Friedrich Schiller (1759–1805) was one of the founders of German Romanticism and one of the greatest playwrights, poets, and theorists writing in German. Some of the most productive years of his short life were spent in Weimar, where his creative friendship with Goethe has taken on a mythic status. His poem “Ode to Joy” became the basis for the finale of Beethoven’s Ninth Symphony and is now the European Union’s anthem.

Alexander Schmidt (introducer) teaches at the Friedrich Schiller University, Iena, Germany, and is currently the Feodor Lynen Fellow at the University of Chicago.

Keith Tribe (translator) has studied and taught at universities in Germany and the UK and is a distinguished author and translator.