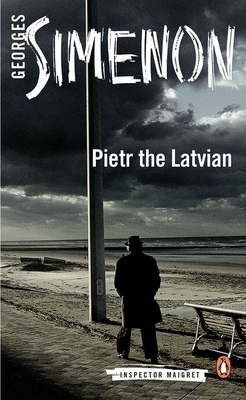 This is book number 1 in the Inspector Maigret series.

In Simenon’s iconic first novel featuring Inspector Maigret, the laconic detective is taken from grimy bars to luxury hotels as he traces a fraudster’s true identity

Inspector Jules Maigret, a taciturn detective and commissaire of the Paris Brigade Criminelle, receives notice from Interpol that a notorious conman known only as Peitr the Latvian is en route to France. Armed with a broad description and a scant few clues, Maigret plans to intercept him at the train station outside Paris. But when he arrives, he finds that there are several suspects—some living, and some dead—who meet the description uncannily well.

Who is Pietr the Latvian, truly? A vagrant, a seaman, a businessman, a corpse? Russian, Norwegian, American or Latvian?  In Pietr the Latvian, the iconic first novel of Simenon’s classic series that made Inspector Maigret a legendary figure in the annals of detective fiction, Maigret must use his every instinct to unravel the mystery and track down the truth.

Georges Simenon (1903–1989) was born on February 12th, 1903 in Liege, Belgium. At the age of nineteen, Simenon embarked to Paris to begin a career as a writer.  In 1923 he began publishing under various pseudonyms, and in 1929 began the Inspector Maigret series which helped elevate him to a household name in continental Europe.  His prolific output of more than four hundred novels and the gripping, dark realism of his prose has cemented him as an inedlible fixture of twentieth century literature.  He died in 1989 in Lausanne, Switzerland.

David Bellos is the director of the Program in Translation and Intercultural Communication at Princeton University, where he is also a professor of French and comparative literature. He has won many awards for his translations of Georges Perec, Ismail Kadare, and others, including the Man Booker International Translator’s Award.