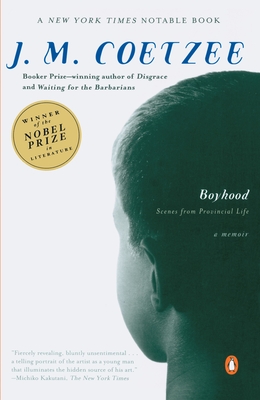 This is book number 1 in the Scenes from Provincial Life series.

"Fiercely revealing, bluntly unsentimental. . .a telling portrait of the artist as a young man that illuminates the hidden source of his art." —Michiko Kakutani, The New York Times

Coetzee grew up in a new development north of Cape Town, tormented by guilt and fear. With a father he despised, and a mother he both adored and resented, he led a double life—the brilliant and well-behaved student at school, the princely despot at home, always terrified of losing his mother's love. His first encounters with literature, the awakenings of sexual desire, and a growing awareness of apartheid left him with baffling questions; and only in his love of the high veld ("farms are places of freedom, of life") could he find a sense of belonging. Bold and telling, this masterly evocation of a young boy's life is the book Coetzee's many admirers have been waiting for, but never could have expected.