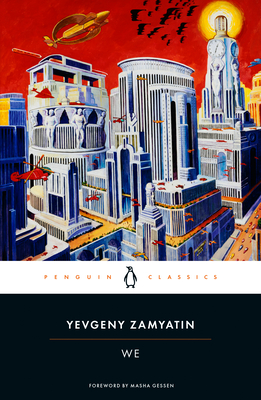 Often cited as the primary influence on George Orwell's 1984 (with famed occult writer Colin Wilson going so far as to say that he doubted Orwell's volume would have found publication in the United Kingdom had there been a decent English translation of this book available at the time), We is an innovative, passionately pro-democratic novel on its own terms. Both an imaginative exploration of human consciousness and a vehement argument against totalitarianism - the creeping of which was well underway at the time and place of its writing in the Soviet Union of the 1920's - We was almost impossibly ahead of its time, and - sadly - is all too timely, present day. Read and remember: there can be no final revolution!

Yevgeny Zamyatin's We is a powerfully inventive vision that has influenced writers from George Orwell to Ayn Rand. In a glass-enclosed city of absolute straight lines, ruled over by the all-powerful 'Benefactor', the citizens of the totalitarian society of OneState live out lives devoid of passion and creativity - until D-503, a mathematician who dreams in numbers, makes a discovery: he has an individual soul. Set in the twenty-sixth century AD, We is the classic dystopian novel and was the forerunner of works such as George Orwell's 1984 and Aldous Huxley's Brave New World. It was suppressed for many years in Russia and remains a resounding cry for individual freedom, yet is also a powerful, exciting and vivid work of science fiction. Clarence Brown's brilliant translation is based on the corrected text of the novel, first published in Russia in 1988 after more than sixty years' suppression.

Yevgeny Zamyatin (1884-1937) was a naval architect by profession and a writer by nature. His favorite idea was the absolute freedom of the human personality to create, to imagine, to love, to make mistakes, and to change the world. This made him a highly inconvenient citizen of two despotisms, the tsarist and the Communist, both of which exiled him—the first for a year, the latter forever. He wrote short stories, plays, and essays, but his masterpiece is We, written in 1920–21 and soon thereafter translated into most of the languages of the world, yet it first appeared in Russia only in 1988. It is the archetype of the modern dystopia, or anti-utopia; a great prose poem on the fate that might befall all of us if we surrender our individual selves to some collective dream of technology and fail in the vigilance that is the price of freedom. George Orwell, the author of 1984, acknowledged his debt to Zamyatin. The other great English dystopia of our time, Aldous Huxley’s Brave New World, was evidently written out of the same impulse, though without direct knowledge of Zamyatin’s We.

Clarence Brown (translator/introducer; 1929-2015) was the editor of The Portable Twentieth-Century Russian Reader, which contains his translation of Zamyatin's short story "The Cave."

Masha Gessen (foreword) is the author of more than ten books, including the National Book Award-winning The Future Is History: How Totalitarianism Reclaimed Russia and The Man Without a Face: The Unlikely Rise of Vladimir Putin. A staff writer at The New Yorker and the recipient of numerous awards, including Guggenheim and Carnegie fellowships, Gessen teaches at Bard College and lives in New York City.

“Zamyatin . . . did more than predict some of the specific characteristics of totalitarianism―he predicted its defining condition: the destruction of the individual. . . . [He] found the word for it: We.” ―Masha Gessen, from the Foreword

“[Zamyatin’s] intuitive grasp of the irrational side of totalitarianism—human sacrifice, cruelty as an end in itself—makes [We] superior to Huxley’s [Brave New World].” —George Orwell

“At this dystopian moment in world politics, everyone’s talking about 1984, but take a look at the novel that inspired it (or, at least, which George Orwell reviewed soon before he wrote 1984)—Yevgeny Zamyatin’s We. . . . The dystopia Zamyatin painted has, alas, many echoes with today’s surveillance society—just think of China’s budding ‘social credit’ program, which monitors citizens’ movements. Big Brother was a piker, compared to Xi Jinping. Zamyatin saw it coming.” —Lit Hub