Make Good the Promises: Reclaiming Reconstruction and Its Legacies (Hardcover) 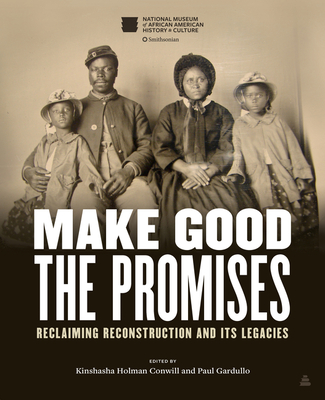 The companion volume to the Smithsonian’s National Museum of African American History and Culture exhibit, opening in September 2021

An incisive and illuminating analysis of the enduring legacy of the post-Civil War period known as Reconstruction—a comprehensive story of Black Americans’ struggle for human rights and dignity and the failure of the nation to fulfill its promises of freedom, citizenship, and justice.

In the aftermath of the Civil War, millions of free and newly freed African Americans were determined to define themselves as equal citizens in a country without slavery—to own land, build secure families, and educate themselves and their children. Seeking to secure safety and justice, they successfully campaigned for civil and political rights, including the right to vote. Across an expanding America, Black politicians were elected to all levels of government, from city halls to state capitals to Washington, DC.

But those gains were short-lived. By the mid-1870s, the federal government stopped enforcing civil rights laws, allowing white supremacists to use suppression and violence to regain power in the Southern states. Black men, women, and children suffered racial terror, segregation, and discrimination that confined them to second-class citizenship, a system known as Jim Crow that endured for decades.

More than a century has passed since the revolutionary political, social, and economic movement known as Reconstruction, yet its profound consequences reverberate in our lives today. Make Good the Promises explores five distinct yet intertwined legacies of Reconstruction—Liberation, Violence, Repair, Place, and Belief—to reveal their lasting impact on modern society. It is the story of Frederick Douglass, Frances Ellen Watkins Harper, Hiram Revels, Ida B. Wells, and scores of other Black men and women who reshaped a nation—and of the persistence of white supremacy and the perpetuation of the injustices of slavery continued by other means and codified in state and federal laws.

With contributions by leading scholars, and illustrated with 80 images from the exhibition, Make Good the Promises shows how Black Lives Matter, #SayHerName, antiracism, and other current movements for repair find inspiration from the lessons of Reconstruction. It touches on questions critical then and now: What is the meaning of freedom and equality? What does it mean to be an American? Powerful and eye-opening, it is a reminder that history is far from past; it lives within each of us and shapes our world and who we are.

Established by an Act of Congress in 2003 and opened to the public in 2016, the National Museum of African American History and Culture (NMAAHC) is the only national museum devoted exclusively to the documentation of African American life, history, and culture.

Paul Gardullo is a historian and curator at the NMAAHC and director of its Center for the Study for Global Slavery.

“Firmly planted in both the past and the present, this is an excellent introduction to an oft-misunderstood chapter in American history.”  — Publishers Weekly (starred review)

“The Reconstruction era is perceived within the racist imagination to be a failure. In fact, popular memory has been a failure. Make Good the Promises is a powerful and illuminating exploration that shows the Black struggle during the Reconstruction era for a multiracial democracy. We are fighting the same struggle today.” — Ibram X. Kendi, National Book Award-Winning Author of Stamped from the Beginning and How to Be an Antiracist

“The truly impressive essays and gorgeous illustrations collected here offer a powerful and unflinching look at a critical period of our history. Engaging directly with a history of what W.E.B. Du Bois called 'propaganda' about this period, Make Good the Promises helps us see that we cannot understand the present without grappling with this violent, transformative time. This beautiful collection reveals why Reconstruction belongs at the center of Black history and, indeed, all of American history.” — Kate Masur, Author of Until Justice Be Done: America's First Civil Rights Movement, from the Revolution to Reconstruction