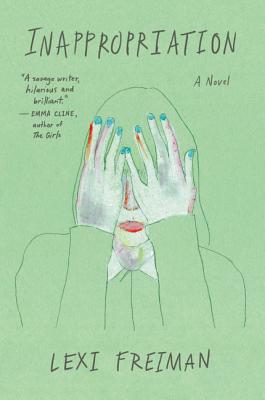 "This book — a satire of identity politics which takes place in a Sydney private girls school — is hands-down the funniest and smartest book I have read all year. Tied up with a critique of contemporary feminism, Donna Haraway’s Cyborg Manifesto, and the empathic aggression of the Discourse, Inappropriation feels necessary in a way few books do, and will make you feel brilliantly squirmy and uncomfortable in the way a novel absolutely should. Inappropriation is simply wonderful."

“This is a daring book, thrillingly of our moment.” -- Emma Cline, author of The Girls

Starting at a prestigious private Australian girls’ school, fifteen-year-old Ziggy Klein is confronted with an alienating social hierarchy that hurls her into the arms of her grade’s most radical feminists. Tormented by a burgeoning collection of dark, sexual fantasies, and a biological essentialist mother, Ziggy sets off on a journey of self-discovery that moves from the Sydney drag scene to the extremist underbelly of the Internet.

As PC culture collides with her friends’ morphing ideology and her parents’ kinky sex life, Ziggy’s understanding of gender, race, and class begins to warp. Ostracized at school, she seeks refuge in Donna Haraway’s seminal feminist text, A Cyborg Manifesto, and discovers an indisputable alternative identity. Or so she thinks. A controversial Indian guru, a transgender drag queen, and her own Holocaust-surviving grandmother propel Ziggy through a series of misidentifications, culminating in a date-rape revenge plot so confused, it just might work.

Uproariously funny, but written with extraordinary acuity about the intersections of gender, sexual politics, race, and technology, Inappropriation is literary satire at its best. With a deft finger on the pulse of the zeitgeist, Lexi Freiman debuts on the scene as a brilliant and fearless new talent.

Lexi Freiman is a fiction editor at George Braziller, a publisher in New York, and a recent Columbia University MFA grad. She was a Center for Fiction Writing Fellow in 2013 and has published in The Literary Review. Before moving to New York, she was an actress with Australia’s national Shakespeare company, where she performed roles such as Celia from As You Like It, Lady Capulet from Romeo and Juliet, and Thaisa from Pericles, all at the Sydney Opera House.

“A witty, energetic send-up of the current pieties surrounding racial and sexual identity.... It goes without saying that “Inappropriation” is irreverent, but this is a loving, sisterly sort of ridicule, spoofing the absurdities of the very young and very woke.” — Wall Street Journal

“Inappropriation skewers just about every societal and literary convention you can think of, making it one of the most subversive coming of age stories out there...Go along for the ride with Ziggy, it’ll be worth the fiery journey.” — Nylon Magazine

“The Australian all-girls’ high school that’s this hilarious debut novel’s backdrop is a petri dish of contemporary culture war. Freiman’s gambit is that satire and the disavowal of pieties can lead to a deeper sort of empathy.“ — Vulture

“Intelligent and has its finger on the zeitgeist of the Instagram and Tumblr generation.” — New York Times Book Review

“[Freiman] has the same thick, buttermilky compassion for her readers as she does for her characters, sour and full of saggy lumps. She burlesques them—and you—but only because she identifies.… Darkly funny…. Nimble and pert, parkouring disrespectfully across the suburban mall of the English language.” — BookForum

“Lexi Freiman is a savage writer, hilarious and brilliant, and in Inappropriation, she has reframed the traditional coming-of-age story, tackling it with irreverence and acid wit. This is a daring book, thrillingly of our moment.” — Emma Cline, author of The Girls

“Inappropriation is sly and risky, but also sweet, a wickedly funny machine built to make us laugh and think. The comic novel has a bold new voice in Lexi Freiman, and she could not have come along at a better time.” — Sam Lipsyte, author of The Fun Parts: Stories and The Ask

“Inappropriation reads like a modern-day Gulliver’s Travels, exploring the psyche of a generation searching for a better world in all the wrong places.  Wry and funny and unabashedly provocative, Lexi Freiman is a gimlet-eyed satirist of the cultural morasses and political impasses of our times.” — Alexandra Kleeman, author of Intimations

“Inappropriation’s crackling, electric prose is an uncomfortable joyride. You’ll laugh out loud and squirm and wince, but you sure won’t put it down. This novel is an original treasure--sentence by sentence, there is just no book like it.” — Alissa Nutting, author of Made for Love

“Inappropriation unpacks and skewers our confused age in the guise of a winning and authentic coming of age story. Only read Lexi Freiman’s assured and enormously enjoyable debut novel if you want to discover an incisive new voice full of dark, merciless wit.” — Steve Toltz, author of Quicksand and A Fraction of the Whole

“A bold and heady coming-of-age tale with a biting sense of humor.” — Library Journal

“Stellar.... Freiman perfectly depicts the timeless awkwardness of growing up with the more modern awkwardness of having your life broadcast on social media, and thus growing up in front of the rest of the world. This is a very strong first novel from a promising voice.” — Publishers Weekly (starred review)