A People's History of the United States (Hardcover) 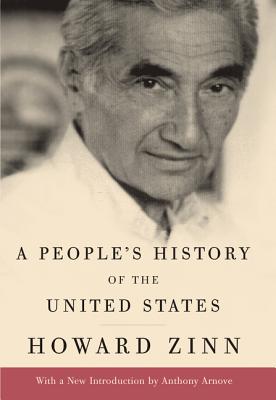 "A wonderful, splendid book—a book that should be read by every American, student or otherwise, who wants to understand his country, its true history, and its hope for the future." –Howard Fast

Historian Howard Zinn’s A People’s History of the United States chronicles American history from the bottom up, throwing out the official narrative taught in schools—with its emphasis on great men in high places—to focus on the street, the home, and the workplace.

Known for its lively, clear prose as well as its scholarly research, it is the only volume to tell America's story from the point of view of—and in the words of—America's women, factory workers, African-Americans, Native Americans, the working poor, and immigrant laborers. As Zinn shows, many of our country's greatest battles—the fights for a fair wage, an eight-hour workday, child-labor laws, health and safety standards, universal suffrage, women's rights, racial equality—were carried out at the grassroots level, against bloody resistance.

Covering Christopher Columbus's arrival through President Clinton's first term, A People's History of the United States features insightful analysis of the most important events in our history. This edition also includes an introduction by Anthony Arnove, who wrote, directed, and produced The People Speak with Zinn and who coauthored, with Zinn, Voices of a People’s History of the United States.

Howard Zinn (1922–2010) was a historian, playwright, and social activist. In addition to A People’s History of the United States, which has sold more than two million copies, he is the author of numerous books including The People Speak, Passionate Declarations, and the autobiography, You Can’t Be Neutral on a Moving Train.

“[A People’s History of the United States is] one of the most important books I have ever read in a long life of reading...It’s a wonderful, splendid book--a book that should be read by every American, student or otherwise, who wants to understand his country, its true history, and its hope for the future.”
— Howard Fast

“Professor Zinn writes with an enthusiasm rarely encountered in the leaden prose of academic history, and his text is studded with telling quotations from labor leaders, war resisters and fugitive slaves. . . . [It] should be required reading.”
— Eric Foner, New York Times Book Review

"Howard Zinn's work literally changed the conscience of a generation. And the series of 'people's histories' derived from this great work have provided new understanding of who we are and what we should aspire to be."
— Noam Chomsky

"A brilliant and moving history of the American people."
— Library Journal

"A brilliantly written story about the U.S. through the lives of those too often overlooked."
— Time magazine