When the Earth Had Two Moons: Cannibal Planets, Icy Giants, Dirty Comets, Dreadful Orbits, and the Origins of the Night Sky (Hardcover) 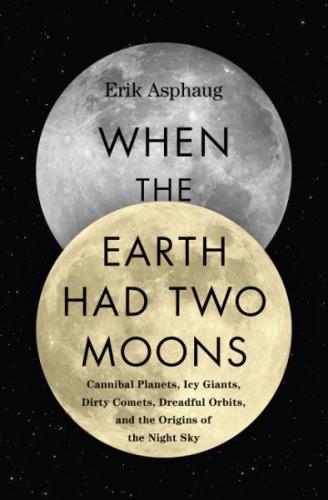 An astonishing exploration of planet formation and the origins of life by one of the world’s most innovative planetary geologists.

In 1959, the Soviet probe Luna 3 took the first photos of the far side of the moon. Even in their poor resolution, the images stunned scientists: the far side is an enormous mountainous expanse, not the vast lava-plains seen from Earth. Subsequent missions have confirmed this in much greater detail.

How could this be, and what might it tell us about our own place in the universe? As it turns out, quite a lot.

Fourteen billion years ago, the universe exploded into being, creating galaxies and stars. Planets formed out of the leftover dust and gas that coalesced into larger and larger bodies orbiting around each star. In a sort of heavenly survival of the fittest, planetary bodies smashed into each other until solar systems emerged. Curiously, instead of being relatively similar in terms of composition, the planets in our solar system, and the comets, asteroids, satellites and rings, are bewitchingly distinct. So, too, the halves of our moon.

In When the Earth Had Two Moons, esteemed planetary geologist Erik Asphaug takes us on an exhilarating tour through the farthest reaches of time and our galaxy to find out why. Beautifully written and provocatively argued, When the Earth Had Two Moons is not only a mind-blowing astronomical tour but a profound inquiry into the nature of life here—and billions of miles from home.

Erik Asphaug is a professor in the Lunar and Planetary Laboratory at the University of Arizona. He studies planet formation and evolution and has been on the science teams of numerous past and upcoming NASA and international space missions. He lives with his family in Arizona.

“Delightful. ... The story swings from the birth of the universe, through the history of astronomy, to the modern understanding of the piece-by-piece building of the planets. ... Makes the solar system an even weirder and more wonderful place than it seemed before.” — Wall Street Journal

“A gripping and endlessly fascinating account of how planets formed.” — Alan Stern, planetary scientist and leader of NASA’s New Horizons mission to Pluto

"If the planets were born out of material orbiting the Sun, like raindrops condensing from a cloud, why do they differ so much in structure and chemical composition? This detailed book assesses the astronomical and geological evidence on the origin of planetary diversity." — Nature. "Best Science Picks of the week"

“When the Earth Had Two Moons is a lyrical exploration of our solar system, introducing not just the facts of its formation and nature but the implications for all of us living on Earth.” — Amy Mainzer, visiting scientist at the Jet Propulsion Laboratory and professor of planetary science at the University of Arizona

“An enthusiast as well as a fine writer, Asphaug lays it out from the beginning. . . . An expert, entertaining review of what’s known about the solar system.” — Kirkus Reviews

“Asphaug draws upon his years of research and expertise to provide the reader with a truly wondrous and surprising exploration of planet formation and the origins of life. A meticulous and expertly presented work of science, When the Earth Had Two Moons is unreservedly and enthusiastically recommended.”
— Midwest Book Review