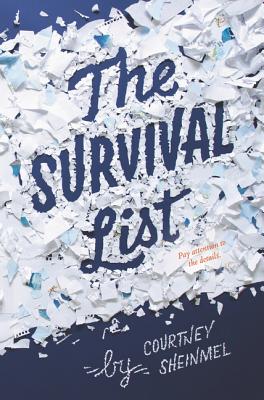 “Nobody writes about family secrets with the grace, compassion, and intrigue of Courtney Sheinmel.” —Leila Sales, author of This Song Will Save Your Life

Fans of I Was Here by Gayle Forman and Far from the Tree by Robin Benway will be floored by this heartbreaking yet uplifting teen novel about a grieving girl who follows a mysterious list across the country after her older sister’s death.

Sloane Weber is devastated when her older sister dies by suicide. Talley was a bright light who made everyone want to step closer. Why had she made that unthinkable choice?

The only clue Talley left behind for Sloane is a puzzle—a list of random places and names, along with the phone number of a boy named Adam, who lives in California and claims he didn’t know Talley.

Sloane heads west, enlists Adam’s help, and together they search for answers. But while Sloane is drawn to Adam, she can’t shake the feeling that he’s hiding something. Is Sloane ready to learn the truth—about Adam, her sister, or the secrets her family has been hiding for years?

Courtney Sheinmel is the author of over twenty acclaimed books for kids and teens, including Edgewater and the Kindness Club series. For the past decade, Courtney has mentored teen writers at the nonprofit Writopia Lab and has been recognized by the Scholastic Art & Writing Awards as an outstanding educator. She lives in New York City. www.courtneysheinmel.com

“Though the author intricately portrays Sloane’s grief and guilt, her poignant take on the butterfly effect—including thought-provoking references to the Holocaust and its legacy—explores not only suicide and its aftermath, but survivors’ capacity to heal. …This is a sympathetic, thoughtful exploration of depression, suicide, grief, and healing.” — Kirkus Reviews

“An equal parts heartbreaking and heartwarming story about family secrets, the legacies of loss, and the ways we put ourselves back together after we’ve been shattered. The Survival List shows us how far we’ll go to understand the people we love, even after they’re gone. I couldn’t put it down.”  — Julie Buxbaum, New York Times bestselling author of Tell Me Three Things

“Nobody writes about family secrets with the grace, compassion, and intrigue of Courtney Sheinmel. The Survival List is a work of deep empathy, reminding us that we can never fully understand what’s going on in someone else’s life, but that there is enormous value in trying to find out.” — Leila Sales, author of This Song Will Save Your Life

“With delicate balance, Sheinmel illuminates the suffering going on behind the scenes in daily lives that can lead to desperate acts and the hollowed-out aftermath of those left behind.” — Booklist

"Sheinmel treats the topics of suicide and depression with nuance and compassion, beautifully conveying Sloane’s feelings of guilt for not being able to save Talley while gently, realistically refuting them." — Horn Book Magazine

“A terrific read - smart, sexy, and shockingly scandalous. Sheinmel is at her absolute best.” — Sarah Mlynowski, author of Ten Things We Did (And Probably Shouldn’t Have)

“A deliciously decadent story of glamour, family secrets, and the twisted legacy of a tortured past. In other words, everything I’ve ever wanted, all in one book.” — Robin Wasserman, author of The Waking Dark

“…a great read so full of surprises and twists that I kept saying out loud, ‘I didn’t see that coming.’” — Liane Freed, Watchung Booksellers, Montclair, NJ

“ A richly told coming of age story of good intentions and family secrets, I read straight through, enjoying every last detail. This surely is a winner.” — Angela Mann, Kepler’s Books, Menlo Park, CA