Famous Father Girl: A Memoir of Growing Up Bernstein (Paperback) 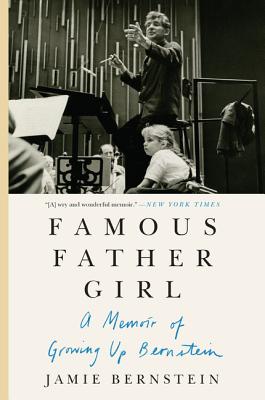 For most of the second half of the twentieth century, Leonard Bernstein was the classical music world’s equivalent of the Beatles, in fact, he met, played music and probably shared illicit substances with John, Paul, George and Ringo, an event forever imprinted on the mind off his then teenage daughter, Jaimie, who has written this extraordinary memoir about her relationship with her larger than life father. ‘Lenny’ as he came to be known to all who adored him, was the handsome, charismatic conductor of the New York Philharmonic who brought the mystery of the orchestra to the masses through his masterful series of televised Young People’s Concerts. He also resuscitated the genius of Gustav Mahler, composed the cataclysmic scores of West Side Story and Candide, wrote the chilling Kaddish and Jeremiah Symphonies as well as the revolutionary Chichester Psalms, all the while hobnobbing with Lauren Bacall, Stephen Sondheim, Jacqueline Kennedy Onassis, Mike Nichols, Bobby Kennedy, Aaron Copland, Betty Comden and Adolph Green and probably even the Teutonic Herbert von Karajan, as he summered at Tanglewood and hosted an infamous cocktail party to raise money for the Black Panthers. Unruly, histrionic, surrounded by swathes of cigarette smoke and legions of admirers, Lenny was hyper-sexual and multi-sexual, a man of his time before his time. To be one of his three children was surely a test of will, courage and spunk. But this is no Daddy Dearest. Jaimie Bernstein has written a loving, frank, clear-eyed and funny account of her complicated, beloved father, never losing sight of the influence of the radical 60’s on their lives. This wonderful reminiscence is as much about her coming of age as it is about Lenny’s complicated genius. Her talent shines through as she recounts not only her father’s effect on her life, but his effect on his entire extended family as well as his painful devotion to her mother, the Chilean actress, painter and social activist, Felicia Montealegre.

The composer of On the Town and West Side Story, chief conductor of the New York Philharmonic, television star, humanitarian, friend of the powerful and influential, and the life of every party, Leonard Bernstein was an enormous celebrity during one of the headiest periods of American cultural life, as well as the most protean musician in twentieth century America.

But to his eldest daughter, Jamie, he was above all the man in the scratchy brown bathrobe who smelled of cigarettes; the jokester and compulsive teacher who enthused about Beethoven and the Beatles; the insomniac whose 4 a.m. composing breaks involved spooning baby food out of the jar. He taught his daughter to love the world in all its beauty and complexity. In public and private, Lenny was larger than life.

In Famous Father Girl, Bernstein mines the emotional depths of her childhood and invites us into her family’s private world. A fantastic set of characters populates the Bernsteins’ lives, including: the Kennedys, Mike Nichols, John Lennon, Richard Avedon, Stephen Sondheim, Jerome Robbins, and Betty (Lauren) Bacall.

An intoxicating tale, Famous Father Girl is an intimate meditation on a complex and sometimes troubled man, the family he raised, and the music he composed that became the soundtrack to their entwined lives. Deeply moving and often hilarious, Bernstein’s beautifully written memoir is a great American story about one of the greatest Americans of the modern age.

Jamie Bernstein is a writer, broadcaster, and filmmaker. She travels the world as a concert narrator. Her documentary, Crescendo: The Power of Music, is available on Netflix. She lives in New York City.

“Famous Father Girl paints a winning picture of the Bernstein family, especially her parents, the much-celebrated Lenny and the much-loved Felicia, while offering a poignant take on the complexities of growing up as the child of a legend—or, for that matter, as anybody’s child.” — Adam Gopnik

“Bernstein’s jaw-dropping honesty and humor gives us the best example of the ‘growing up famous’ genre since Brooke Hayward’s classic Haywire.” — John Guare

“Jamie Bernstein’s book about her fabled father not only takes us closer to Leonard Bernstein than anything yet published but stands by itself as a beautifully written and unflinchingly courageous expression of love, exasperation, amazement and forgiveness.” — Tim Page, Professor of Journalism and Music at the University of Southern California

“Seduction might have been his greatest talent, one countered by his daughter’s aptitude for truth-telling. Her memoir portrays a man whose weaponized ego fits perfectly into American celebrity culture, but it’s also a story of how his daughter survived that ego to become her own woman, even as she remains intent on keeping her father’s legacy alive. By preserving his legacy, Jamie honors her father as both a great talent and a complex human being.” — Washington Post

“An intimate look at the famous, and famously private, musician, whose 7 Emmys only begin to scratch the surface of his musical achievements.” — Vanity Fair

“Making her literary debut, broadcaster and filmmaker Jamie Bernstein offers an intimate, gossipy, and candid memoir of growing up the eldest child of renowned conductor and composer Leonard Bernstein (1918-1990).... A cleareyed portrait of a spirited, and troubled, family.” — Kirkus

“[In Famous Father Girl,] Bernstein paints a fascinating picture of the dizzying magic that Leonard Bernstein brought to his music—and the complexity to his home life.” — Publishers Weekly