No Room for Small Dreams: Courage, Imagination, and the Making of Modern Israel (Paperback) 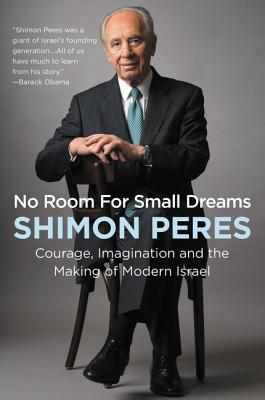 In 1934, eleven-year-old Shimon Peres emigrated to the land of Israel from his native Poland, leaving behind an extended family who would later be murdered in the Holocaust. Few back then would have predicted that this young man would eventually become one of the towering figures of the twentieth century. Peres would indeed go on to serve the new state as prime minister, president, foreign minister, and the head of several other ministries. He was central to the establishment of the Israeli Defense Forces and the defense industry that would provide the young state with a robust deterrent power. He was crucial to launching Israel’s nuclear energy program and to the creation of its high-tech “Start-up Nation” revolution. His refusal to surrender to conventional wisdom and political norms helped save the Israeli economy and prompted some of the most daring military operations in history, among them the legendary Operation Entebbe. And yet, as important as his role in creating and deploying Israel’s armed forces was, his stunning transition from hawk to dove—with its accompanying unwavering commitment to peace—made him one of the globe’s most recognized, honored, and admired statesmen.

In this, his final work, finished only weeks before his passing, Peres offers a long-awaited examination of the crucial turning points in Israeli history through the prism of having been a decision maker and eyewitness. Told with the frankness of someone aware this would likely be his final statement, No Room for Small Dreams spans decades and events, but as much as it is about what happened, it is about why it happened. Examining pivotal moments in Israel’s rise, Peres explores what makes for a great leader, how to make hard choices in a climate of uncertainty and distress, the challenges of balancing principles with policies, and the liberating nature of imagination and unpredicted innovation. In doing so, he not only charts a better path forward for his beloved country but provides deep and universal wisdom for younger generations who seek to lead—be it in politics, business, or the broader service of making our planet a safer, more peaceful, and just place.

Shimon Peres was one of Israel’s founding fathers and for more than six decades was an architect of its ascent from a fragile state to a global power. In 1994, he was awarded the Nobel Peace Prize for his extraordinary efforts to forge peace between Israel and the Palestinians. In 1996, he founded the groundbreaking Peres Center for Peace and Innovation to focus on developing and implementing imaginative peacebuilding programs around the world. Peres died in September 2016, shortly after finishing his work on this book. He was ninety-three years old.

“The final words of the last of the founding generation of Israeli leaders. But indefatigable dreamer that Mr. Peres was, his book also delivers a pointed, if veiled, message from the grave about the apparent dearth of vision in the present, and it looks to the future.”
— New York Times

“In a seven-decade career packed with historic triumphs and painful setbacks, Shimon Peres took pride in always looking forward. The book offers a rare glimpse into key chapters of his extraordinary life [and] offers his trademark optimistic blueprint for future leadership.”
— Associated Press

“Shimon Peres was a giant of Israel’s founding generation, a tireless advocate for peace, and an eternal optimist who lived his life with a sense of hope and possibility…All of us have much to learn from his story, which now belongs to the ages.”
— Barack Obama

“Israel has made a tremendous contribution to global technological innovation...The leadership lessons in this book show why Shimon Peres was, in so many endeavors, able to glimpse opportunity when others predicted failure. If you don’t try, you don’t know– that’s the secret of innovation. Shimon Peres understood that.”
— Eric Schmidt

“By his unyielding determination and principle, Shimon Peres time and again helped guide his beloved country through the crucible of mortal challenge. But it was by his innate humanity, his decency, that Shimon inspired the world over.”
— George H. W. Bush

“Shimon Peres started…as Israel’s brightest student, became one of its best teachers, and ended up its biggest dreamer…This book captures my friend’s lifelong belief in our potential to rise above our wounds, our resentments, and our fears to make the most of today and claim the promise of tomorrow.”
— Bill Clinton

“Shimon Peres, one of the great leaders of Israel for more than half a century, was an unusual statesman: a dreamer and a pragmatist, a thinker and a doer, a fearless campaigner for peace and compromise and a tireless builder of Israel’s armed forces...This book is a special treat.”
— Amos Oz

When I think of Shimon Peres, I think of a man who was a poet and a soldier--a rare combination that, when it works, is formidable.
— Barbara Walters

“No Room for Small Dreams proves that Peres’ voice and vision are not only still with us, but as forceful and relevant as ever.”
— Forbes

“Comforting those who view the current situation as bereft of hope, Peres offers his own achievements as evidence that the seemingly impossible can become reality.”
— Publishers Weekly

“Shimon Peres was a visionary optimist to his dying day, and his last words of hope were addressed to the young.  For all our sakes, let them be heard!”
— Daniel Kahneman

“The true secret to success, no matter how difficult things seem, is to face challenges with gratitude and forgiveness. That’s how President Shimon Peres became a transformational global leader....Reflecting on his life, he provides not only a gripping story but a hands-on guide to creative thinking.”
— Arianna Huffington

“Peres was a man of big ideas and big accomplishments...I learned more than I previously knew about Peres, but I also felt that I was glimpsing the history of Israel through the eyes of one of its founding fathers and ultimate insiders.”
— Jewish Journal (Los Angeles)