Grown-Up Anger: The Connected Mysteries of Bob Dylan, Woody Guthrie, and the Calumet Massacre of 1913 (Paperback) 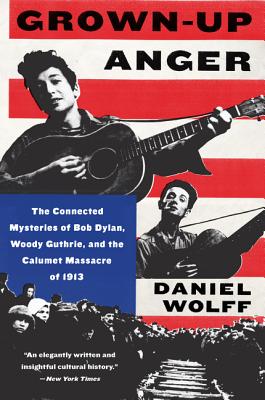 In the 1960s Bob Dylan wrote 'Song for Woody,' a tribute to his idol Woody Guthrie. 'Song for Woody' is sung to the tune of Guthrie's 1941 song '1913 Massacre,' which he wrote about the massacre of striking coal miners' children in Calumet, Michigan, 1913. Wolff weaves these pieces of history together, turning a story about American folk music into a history of the labor movement and the American union movement's Utopian roots. I finished this in a bar alone a few weeks ago. Somebody sidled up and asked 'What are you reading?' I replied, 'I'm reading about the history of American socialism,' and I made myself a friend. I only hope this book makes you a friend too.

A tour de force of storytelling years in the making: a dual biography of two of the greatest songwriters, Bob Dylan and Woody Guthrie, that is also a murder mystery and a history of labor relations and socialism, big business and greed in twentieth-century America—woven together in one epic saga that holds meaning for all working Americans today.

When thirteen-year-old Daniel Wolff first heard Bob Dylan’s "Like a Rolling Stone," it ignited a life-long interest in understanding the rock poet’s anger. When he later discovered "Song to Woody," Dylan’s tribute to his hero, Woody Guthrie, Wolff believed he’d uncovered one source of Dylan’s rage. Sifting through Guthrie’s recordings, Wolff found "1913 Massacre"—a song which told the story of a union Christmas party during a strike in Calumet, Michigan, in 1913 that ended in horrific tragedy.

Following the trail from Dylan to Guthrie to an event that claimed the lives of seventy-four men, women, and children a century ago, Wolff found himself tracing the history of an anger that has been passed down for decades. From America’s early industrialized days, an epic battle to determine the country’s direction has been waged, pitting bosses against workers and big business against the labor movement. In Guthrie’s eyes, the owners ultimately won; the 1913 Michigan tragedy was just one example of a larger lost history purposely distorted and buried in time.

In this magnificent cultural study, Wolff braids three disparate strands—Calumet, Guthrie, and Dylan—together to create a devastating revisionist history of twentieth-century America. Grown-Up Anger chronicles the struggles between the haves and have-nots, the impact changing labor relations had on industrial America, and the way two musicians used their fury to illuminate economic injustice and inspire change.

Daniel Wolff is the author of The Fight for Home; How Lincoln Learned to Read; 4th of July/Asbury Park; and You Send Me: The Life and Times of Sam Cooke, which won the Ralph J. Gleason Music Book Award. He’s been nominated for a Grammy, published three collections of poetry, and collaborated with, among others, songwriters, documentary filmmakers, photographers, and choreographer Marta Renzi, his wife.

“In this book—so soberly inflamed that the pages seem to turn of their own accord—the history of the American twentieth century is made of lodestars that don’t figure in conventional accounts… It is at precisely this moment that its story will be most fully heard.” — Greil Marcus

“In Grown-Up Anger, Daniel Wolff assembles an American triad to raise the ghosts of greed and misery. Through memory, music, and a clear insight into the emotional process of protest, Wolff reminds us of how it did, and how it does, ultimately feel.” — Patti Smith

“The path leading from Woody Guthrie to Bob Dylan has been well traveled, but Daniel Wolff has gone off-road and forged bold new connections between the two cultural titans… The result is an imaginative tour de force that sheds new light on…the heartbreaking history that created them both.” — Anthony DeCurtis, contributing editor, Rolling Stone

“No matter how much you think you know about Bob Dylan and Woody Guthrie, you’re wrong… This is the best sense anyone has ever made about the connection between them, and the best reappraisal either has had in a couple of decades.” — Dave Marsh

“…Wolff provides a primer on the complicated history of anger, political and personal, in American music, one that’s never been more needed than it is today. There aren’t many cultural histories that read like they’ve been written for activists and fans. Grown-Up Anger moves to the head of that list.” — Craig Werner, Evjue-Bascom Professor of Afro-American Studies, University of Wisconsin-Madison, author of A Change Is Gonna Come

“…an exciting romp across labor union history through the lens of American music. Bob Dylan and Woody Guthrie’s protest and solidarity songs represent the disaffection of those marginalized by industrialization, war, and later globalization. If you’re not sure why we need unions… consider Daniel Wolff’s Grown-Up Anger a must read.” — Karen Lewis, president of the Chicago Teachers Union, local 1 of the American Federation of Teachers

“…Wolff provides a primer on the complicated history of anger, political and personal, in American music, one that’s never been more needed than it is today. There aren’t many cultural histories that read like they’ve been written for activists and fans. Grown-Up Anger moves to the head of that list.” — Timothy B. Tyson, author of The Blood of Emmett Till