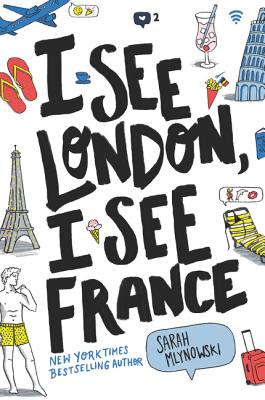 By Sarah Mlynowski
$9.99
On Our Shelves

"This endlessly fun and hugely entertaining romp through Europe had me laughing out loud and reaching for my passport.” —Jennifer E. Smith, author of Windfall

Nineteen-year-old Sydney has the perfect summer mapped out. She’s spending the next four and a half weeks travelling through Europe with her childhood best friend Leela. Their plans include Eiffel Tower selfies, eating cocco gelato, and making out with très hot strangers.

In this hilarious and unforgettable adventure, New York Times bestselling author Sarah Mlynowski tells the story of a girl learning to navigate secret romances, thorny relationships, and the London Tube. As Sydney zigzags through Amsterdam, Switzerland, Italy, and France, she must learn when to hold on, when to keep moving, and when to jump into the Riviera...wearing only her polka dot underpants.

Sarah Mlynowski is the bestselling author of Ten Things We Did (and Probably Shouldn’t Have); I See London, I See France; Don’t Even Think About It; Think Twice; Milkrun; Fishbowl; Bras & Broomsticks; the Whatever After series; and more. Her books have been translated into twenty-nine languages and optioned to Hollywood. Sarah was born in Montreal but now lives and writes in New York City. Visit her at www.sarahm.com and find her everywhere @sarahmlynowski.

“This endlessly fun and hugely entertaining romp through Europe had me laughing out loud and reaching for my passport.”
— Jennifer E. Smith, author of The Statistical Probability of Love at First Sight and Windfall

“Witty with a serious edge, this book encapsulates the wonder, joy, and anxieties that accompany any journey.”
— Publishers Weekly

“Must read YA...If you’re in the mood for fun, sass and adorable romance, pick up this fun-filled book.”
— USA Today

“A poolside read for the ages.... This lovably screwball YA novel will have readers checking whether their passports are still valid.”
— Shelf Awareness

“A ridiculously fun trip through Europe with a protagonist you won’t soon forget.”
— Popsugar