Circling the Square: Stories from the Egyptian Revolution (Hardcover) 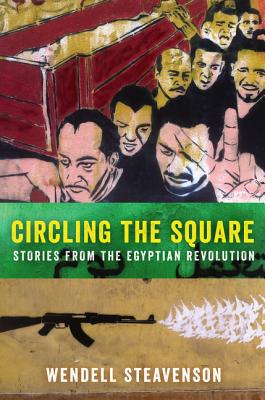 Through a series of stunningly rendered, character-drive vignettes, New Yorker writer Wendell Steavenson recounts the events of the Egyptian Revolution—from Mubarak’s fall to Morsi’s. Here is the panoply of Tahrir Square, a pointillist portrait of a people enacting and reacting to change and hope.

In January 2011, when the crowds gathered to protest Mubarak’s three decades of rule in Egypt, Wendell Steavenson went to cover the events. She spent her days on Tahrir Square, among the tents and the graffiti and the tanks, watching amazed as Egyptians of every stripe came together to challenge the might of the repressive status quo.

Circling the Square is the extraordinary story of the recent Egyptian Revolution as experienced by Cairo’s citizens. Steavenson takes us to the heart of the Revolution and paints indelible portraits of ordinary Egyptians grappling with hope and change amid violence and bloodshed. Here is Bakr, a young man from the slums with his homemade pistol; a seasoned observer who gives up on analysis; a leader who doesn’t want to lead thrust uncomfortably into the spotlight; a Muslim Brotherhood politician trying to smooth over a restless parliament; and a military intelligence officer convinced that only the army can save Egypt.

Steavenson captures the cacophony of dizzying events as violence and elections ebbed and flowed around the revolution, tipping it towards democracy and then back into the military’s hands. Mixing reportage and memoir, anecdotes and incidents and conversations, Steavenson shows how the particular and the personal can illuminate more universal questions: What does democracy mean and what happens when a revolution throws everything up in the air?

Wendell Steavenson wrote for The New Yorker from Cairo for more than a year during the Egyptian revolution. She has spent most of the past decade and a half reporting from the Middle East and the Caucasus for the Guardian, Prospect magazine, Slate, Granta and other publications. Steavenson has written two previous books, both critically acclaimed: Stories I Stole, about post-Soviet Georgia, and The Weight of a Mustard Seed, about life and morality in Saddam's Iraq and the aftermath of the American invasion. She was also a 2014 Nieman Fellow at Harvard. Steavenson currently lives in Paris.

“Few books are better than this one at conveying the confusion and excitement of those days on the square.”
— New York Times Book Review

“Steavenson weaves together a mosaic portrait that tightly focuses on the people…of the revolution.”
— Minneapolis Star Tribune

“There is much to praise in her evocative, impressionistic sketches of the stirring events in Egypt…Her actual writing is first-rate. She cares deeply about her subjects but her critical acuity and keen sense of humor see through their foibles and contradictions.”
— Washington Times

“A moving, empathetic portrayal of a central movement of our time: the brave Egyptian people’s attempt to end repression without the tools or the leaders to succeed.”
— Library Journal

“Impassioned coverage from the front lines of a historic Middle Eastern uprising… An intensive firsthand exploration of modern Egyptian liberation and solidarity.”
— Kirkus