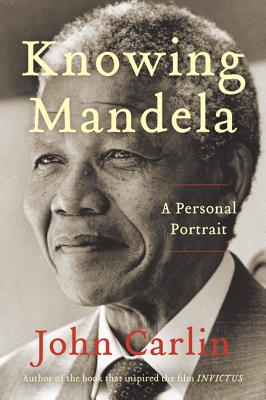 Equal parts freedom fighter and statesman, Nelson Mandela bestrode the world stage for the past three decades, building a legacy that places him in the pantheon of history's most exemplary leaders.

As a foreign correspondent based in South Africa, author John Carlin had unique access to Mandela during the post-apartheid years when Mandela faced his most daunting obstacles and achieved his greatest triumphs. Carlin witnessed history as Mandela was released from prison after twenty-seven years and ultimately ascended to the presidency of his strife-torn country.

Drawing on exclusive conversations with Mandela and countless interviews with people who were close to him, Carlin has crafted an account of a man who was neither saint nor superman. Mandela's seismic political victories were won at the cost of much personal unhappiness and disappointment.

Knowing Mandela offers an intimate understanding of one of the most towering and remarkable figures of our age.

John Carlin is an acclaimed journalist and author who was the Independent's South Africa correspondent from 1989 to 1995. He has also written for the Times, the Observer, the Sunday Times, and the New York Times, among other publications. His previous books include Knowing Mandela and Playing the Enemy: Nelson Mandela and the Game That Made a Nation, which is the basis for the film Invictus.

“...an intimate remembrance by a journalist who grew to love him…Carlin offers a thoughtful tribute to this unparalleled leader.” — Kirkus Reviews

“[A] short, eloquent portrait…Carlin’s skill as a journalist is expertly applied and the result is a concise but thorough look at both the flaws and triumphs of one of the world’s most renowned leaders.” — Examiner.com

“…thoughtful blend of biography and personal encounters…Carlin’s journalistic skills and his effort to be objective present a lively picture of a personally disciplined man of great kindness as well as a clear view of the vast challenges facing South Africa.” — Publishers Weekly