Going into the City: Portrait of a Critic as a Young Man (Paperback) 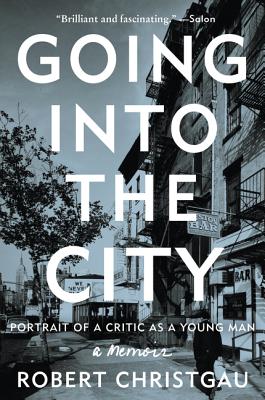 As a song by The Hold Steady puts it, "Everyone's a critic, and most people are DJ's." Now that the internet has rendered that old adage an understatement, it's easy to forget that serious writing about pop culture didn't always exist. It took someone like Robert Christgau to combine American literary criticism, Marxist populism, and gonzo journalism into a form that has since become commonplace both in ivory towers and on smartphone screens. His long-awaited memoir tells you how he did it, in the process offering a history of bohemian New York roughly the length of his lifespan. Some of us have already read every word he's written. The rest of you can start here.

One of our great essayists and journalists—the Dean of American Rock Critics, Robert Christgau—takes us on a heady tour through his life and times in this vividly atmospheric and visceral memoir that is both a love letter to a New York long past and a tribute to the transformative power of art.

Lifelong New Yorker Robert Christgau has been writing about pop culture since he was twelve and getting paid for it since he was twenty-two, covering rock for Esquire in its heyday and personifying the music beat at the Village Voice for over three decades. Christgau listened to Alan Freed howl about rock ‘n’ roll before Elvis, settled east of Manhattan’s Avenue B forty years before it was cool, witnessed Monterey and Woodstock and Chicago ’68, and the first abortion speak-out. He’s caught Coltrane in the East Village, Muddy Waters in Chicago, Otis Redding at the Apollo, the Dead in the Haight, Janis Joplin at the Fillmore, the Rolling Stones at the Garden, the Clash in Leeds, Grandmaster Flash in Times Square, and every punk band you can think of at CBGB.

Christgau chronicled many of the key cultural shifts of the last half century and revolutionized the cultural status of the music critic in the process. Going Into the City is a look back at the upbringing that grounded him, the history that transformed him, and the music, books, and films that showed him the way. Like Alfred Kazin’s A Walker in the City, E. B. White’s Here Is New York, Joseph Mitchell’s Up in the Old Hotel, and Patti Smith’s Just Kids, it is a loving portrait of a lost New York. It’s an homage to the city of Christgau’s youth from Queens to the Lower East Side—a city that exists mostly in memory today. And it’s a love story about the Greenwich Village girl who roamed this realm of possibility with him.

Robert Christgau has covered popular music for Esquire, Newsday, Creem, Playboy, Rolling Stone, Blender, MSN Music, and The Village Voice, where he was a senior editor and chief music critic for thirty-two years. He is currently a columnist for Noisey.com, a contributing critic at NPR’s All Things Considered, and a Visiting Arts Professor at New York University. The author of three books based on his hundreds of Consumer Guide columns and two essay collections, he has been a Guggenheim Fellow, a National Arts Journalism Program Senior Fellow, and a Ferris Teaching Fellow at Princeton. Born and raised in Queens, he has lived in Manhattan’s East Village since 1965.

“An intellectual autobiography that beautifully captures what it feels like when a cultural experience trapdoors you into a new life.” — Grantland

“To read Going Into the City is to spend hours in the company of a completely sui generis critical mind, one that’s not only encyclopedically knowledgeable about mid-to-late 20th-century pop culture but capable of lapidary prose, astute insight, and savage wit.” — Slate

“A New York love story like no other—the greatest of rock & roll writers spends a lifetime devoted to a city . . . as caustic and confrontational as a Clash single, yet as sustaining as an Al Green LP—a story as instantly memorable as Robert Christgau’s voice.” — Rob Sheffield, author of Turn Around Bright Eyes and Love is a Mix Tape

“I’ve waited years for this book. An intellectual bildungsroman in which one of our keenest cultural critics unpacks his own New York story alongside . . . the evolution of pop music criticism—an artform that owes him more than anyone.” — Will Hermes, author of Love Goes To Buildings On Fire: Five Years In New York That Changed Music Forever

“Going Into the City is at once a vivid reminder of one of New York’s golden ages and a blessed glimpse into the forming mind of one of our great critics. Both hilarious and full of juicy detail . . . in that utterly inimitable voice.” — Ann Powers, Author of Weird Like Us: My Bohemian America and, with the artist, Tori Amos: Piece By Piece

“Soul satisfying . . .Vintage Christgau here—wise, sharp, funny, rigorous, and genuinely searching, a mighty work of reflection by a major critic who has never turned his back on the pop lives of everyday people.” — Eric Lott, author of Love and Theft

“Christgau is the last true-blue record critic on earth. [He’s] pretty much who I make my records for. He’s . . . the last of that whole Lester Bangs generation of record reviewers, and I still heed his words.” — ?uestlove

“Often maddening, always thought-provoking . . . With Pauline Kael, Christgau is arguably one of the two most important American mass-culture critics of the second half of the 20th century.” — —Jody Rosen

“An excellent memoir . . . full of rock-critic lore, with vivid cameo appearances by titans like Greil Marcus, Lester Bangs, and Ellen Willis . . . Christgau writes with contagious insight about the records, novels, movies and paintings that have shaped his thinking.” — Rolling Stone

“With the possible exception of his friend Greil Marcus, no American music writer has exerted more influence over the tastes of rock music “consumers” (as he’d insist on calling them) and on the craft of other rock critics.” — Los Angeles Times

“A personal bildungsroman . . [he] brought to a relatively disrespected popular genre in the 1960s and ‘70s a new degree of critical intensity and erudition, delivered with an American vernacular energy and wit and let-it-fly opinionatedness.” — Los Angeles Review of Books

“From growing up . . . to formulating his critical process in the Lower East Side of the 1960s, Christgau takes as rigorous an analytical approach as he does with his reviewing. It’s as much a memoir of the development of his editorial sensibility as it is of his life.” — Brooklyn Magazine

“Remarkable in its unflagging conviction that the disciplined attention a critic applies to art ought to apply to the self as well . . . Also, it’s funny and has a lot of sex and music in it.” — Christian Science Monitor

“Saying something new and distinctive, even about art that’s derivative and undistinguished, is a critic’s perennial challenge. Christgau embraces it with undimming energy, his diction swerving between the academy and the street, his sentences unspooling and spilling references without waiting for you to catch them.” — The Guardian

“Honest, detailed, stirring and sweet. And isn’t that how all the best love songs should be?” — Time

“Here . . . Christgau proves his essentiality with sharp insights and a profound take on popular culture.” — Booklist

“Like his reviews, this is compelling, thoughtful and, of course, opinionated.” — Minneapolis Star Tribune