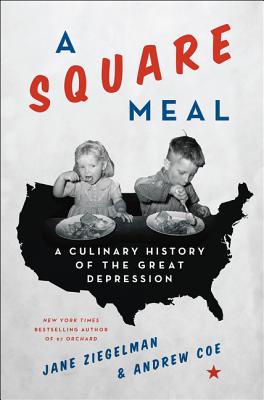 By Jane Ziegelman, Andrew Coe
$26.99
On Our Shelves

From the author of the acclaimed 97 Orchard and her husband, a culinary historian, an in-depth exploration of the greatest food crisis the nation has ever faced—the Great Depression—and how it transformed America’s culinary culture.

The decade-long Great Depression, a period of shifts in the country’s political and social landscape, forever changed the way America eats. Before 1929, America’s relationship with food was defined by abundance. But the collapse of the economy, in both urban and rural America, left a quarter of all Americans out of work and undernourished—shattering long-held assumptions about the limitlessness of the national larder.

In 1933, as women struggled to feed their families, President Roosevelt reversed long-standing biases toward government-sponsored “food charity.” For the first time in American history, the federal government assumed, for a while, responsibility for feeding its citizens. The effects were widespread. Championed by Eleanor Roosevelt, “home economists” who had long fought to bring science into the kitchen rose to national stature.

Tapping into America’s long-standing ambivalence toward culinary enjoyment, they imposed their vision of a sturdy, utilitarian cuisine on the American dinner table. Through the Bureau of Home Economics, these women led a sweeping campaign to instill dietary recommendations, the forerunners of today’s Dietary Guidelines for Americans.

At the same time, rising food conglomerates introduced packaged and processed foods that gave rise to a new American cuisine based on speed and convenience. This movement toward a homogenized national cuisine sparked a revival of American regional cooking. In the ensuing decades, the tension between local traditions and culinary science has defined our national cuisine—a battle that continues today.

A Square Meal examines the impact of economic contraction and environmental disaster on how Americans ate then—and the lessons and insights those experiences may hold for us today.

Jane Ziegelman is the director of the Tenement Museum's culinary center and the founder and director of Kids Cook!, a multiethnic cooking program for children. Her writing on food has appeared in numerous publications, and she is the coauthor of Foie Gras: A Passion. She lives in Brooklyn, New York.

Andrew Coe is a writer and independent scholar specializing in culinary history, and the author of Chop Suey: A Cultural History of Chinese Food in the United States, which was a finalist for a James Beard Award. He appeared in the documentaries The Search for General Tso and Eat: The Story of Food.

“This revealing and perceptive book recalls the Depression through the food history of that dismal era. Intriguing recipes of that period’s most popular dishes help tell the story.”
— Mimi Sheraton, food critic, journalist, and author of 1,000 Foods to Eat Before You Die

“An engaging social history… The vivid recreation of American eating at a historical crossroads is engrossing.”
— Publishers Weekly

“The Great Depression has long been elusive in the history of American food and cooking: we’ve seen snapshots but never a full portrait. Now, with the deep, thoughtful research and lively writing for which they they’re both known, Andrew Coe and Jane Ziegelman at last open up this era.”
— Laura Shapiro, author of Something from the Oven: Reinventing Dinner in 1950s America

“The authors give a fresh slant to the familiar but complicated history of one of America’s most difficult eras… A highly readable, illuminating look at the many ramifications of feeding the hungry in hard times.”
— Kirkus Reviews

“one of those rare books which deliver more than they promise.”
— Washington Times