The Bad Guys Won: A Season of Brawling, Boozing, Bimbo Chasing, and Championship Baseball with Straw, Doc, Mookie, Nails, the Kid, and the Rest of the 1986 Mets, the Rowdiest Team Ever to Put on a New York Uniform--and Maybe the Best (Paperback) 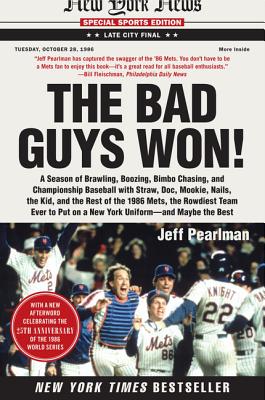 "Jeff Pearlman has captured the swagger of the '86 Mets. You don't have to be a Mets fan to enjoy this book—it's a great read for all baseball enthusiasts." —Philadelphia Daily News

Award-winning Sports Illustrated baseball writer Jeff Pearlman returns to an innocent time when a city worshipped a man named Mookie and the Yankees were the second-best team in New York.

It was 1986, and the New York Mets won 108 regular-season games and the World Series, capturing the hearts (and other assorted body parts) of fans everywhere. But their greatness on the field was nearly eclipsed by how bad they were off it. Led by the indomitable Keith Hernandez and the young dynamic duo of Dwight Gooden and Darryl Strawberry, along with the gallant Scum Bunch, the Amazin’s left a wide trail of wreckage in their wake—hotel rooms, charter planes, a bar in Houston, and most famously Bill Buckner and the hated Boston Red Sox.

With an unforgettable cast of characters—including Doc, Straw, the Kid, Nails, Mex, and manager Davey Johnson—this “affectionate but critical look at this exciting season” (Publishers Weekly) celebrates the last of baseball’s arrogant, insane, rock-and-roll-and-party-all-night teams, exploring what could have been, what should have been, and what never was.

Jeff Pearlman is a columnist for SI.com, a former Sports Illustrated senior writer, and the critically acclaimed author of Boys Will Be Boys, The Bad Guys Won!, and Love Me, Hate Me.

“The Bad Guys Won is designed to delight any Mets fan—at least the less prudish ones. Pearlman...keeps a tight focus on the championship season.”
— New York Times Book Review

“Pearlman has done his homework: he breaks down the wall that separates the ballplayer from the fan.”
— Newsday

“As a reminder that most of us know absolutely nothing about the people we cheer for, except that they wear our hometown colors, this is a worthwhile read for any sports fan.”
— Sports Illustrated

"A great read! Jeff Pearlman skillfully takes you deep into the silly and goofy and gross and slightly scary world that was the New York Mets clubhouse."
— Rocky Mountain News

"Jeff Pearlman has captured the swagger of the '86 Mets. You don't have to be a Mets fan to enjoy this book—it's a great read for all baseball enthusiasts."
— Philadelphia Daily News