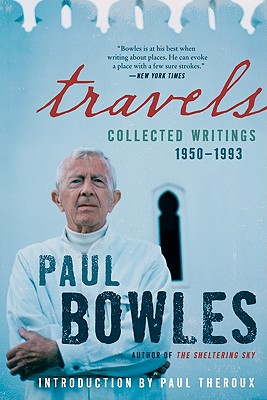 “Bowles is at his best when writing about places. He can evoke a place with a few sure strokes.”
—New York Times

“His work is art. At his best, Bowles has no peer.”
—Time

Travels is a thrilling anthology of the travel writings of Paul Bowles, author of the era-defining post-war novel The Sheltering Sky. The acclaimed essays in Travel—never before collected in a single volume—span more than sixty years and range from Bowles’s early days in Paris to his time spent in Ceylon, Thailand, Kenya, and his expatriate life in Morocco. Insightful, exciting, and evocative, featuring original photographs throughout, Travels is a stunning collection of rarely seen shorter works—a showcase of the literary artistry of one of the truly great American writers of the twentieth century.

Paul Bowles was born in 1910 and studied music with composer Aaron Copland before moving to Tangier, Morocco. A devastatingly imaginative observer of the West's encounter with the East, he is the author of four highly acclaimed novels: The Sheltering Sky, Let It Come Down, The Spider's House, and Up Above the World. In addition to being one of the most powerful postwar American novelists, Bowles was an acclaimed composer, a travel writer, a poet, a translator, and a short story writer. He died in Morocco in 1999.

“Bowles [is] a writer of power and precision… [TRAVELS] reads like a fable and makes one want to follow in his footsteps.” — Boston Globe