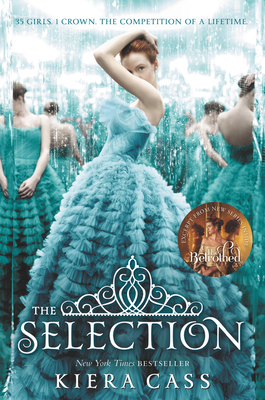 This is book number 1 in the The Selection series.

“In this dystopian setting that overlays a futuristic society with the things we love about old-fashioned fairy tales, Cass weaves an intriguing story with the perfect balance of real-world problems and romance. America is a young, proud girl with a big heart and a bit of a temper from an impoverished family and social class,. She's a talented, self-respecting character who is great fun to follow in this fantastic Bachelor-type setting. I can't wait for the sequel!”
— Larissa Genschaw, Children's Bookshop, Kent, WA

Prepare to be swept into a world of breathless fairy-tale romance, swoonworthy characters, glittering gowns, and fierce intrigue perfect for readers who loved Divergent, Delirium, or The Wrath & the Dawn.

For thirty-five girls, the Selection is the chance of a lifetime. The opportunity to escape a rigid caste system, live in a palace, and compete for the heart of gorgeous Prince Maxon. But for America Singer, being Selected is a nightmare. It means turning her back on her secret love with Aspen, who is a caste below her, and competing for a crown she doesn’t want.

Then America meets Prince Maxon—and realizes that the life she’s always dreamed of may not compare to a future she never imagined.

Don’t miss The Betrothed, a glittering royal romance sure to captivate Kiera Cass’s legion of loyal readers and lovers of courtly intrigue alike!

Kiera Cass is the #1 New York Times bestselling author of the Selection series and The Siren. She is a wife and mom and too many other things to list. If she could make a crown out of anything, it would be the unending tears of her readers. You can learn more about Kiera and her books at www.kieracass.com.

“An engrossing tale reminiscent of Shannon Hale’s Princess Academy and Ally Condie’s Matched. Fairy-tale lovers will lose themselves in America’s alternate reality and wish that the next glamorous sequel were waiting for them.” — School Library Journal

“Cass’s immensely readable debut novel is a less drastic Hunger Games, with elaborate fashion and trappings. The fast-paced action will have readers gasping for the upcoming sequel.” — Booklist