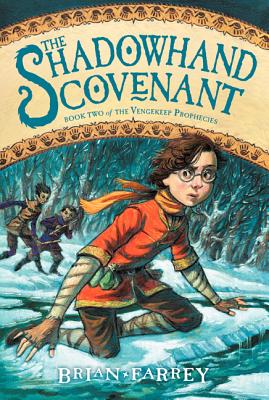 This is book number 2 in the Vengekeep Prophecies series.

With more twists and turns than a palace vault and one unforgettable family of thieves, this second book in Brian Farrey's epic and critically acclaimed Vengekeep Prophecies trilogy will leave you breathless.

Trouble is brewing in the Five Provinces. Mysterious magical artifacts have gone missing from the royal vaults. Master thieves from a secret society known as the Shadowhands are disappearing. And without explanation, the High Laird has begun imprisoning the peaceful Sarosans.

Jaxter Grimjinx suspects all these things are connected, but after the tapestry fiasco that nearly destroyed Vengekeep, he knows better than to get involved. Then he and his parents receive a summons from the Shadowhands—a summons that they would be foolish to ignore—and Jaxter is thrust into the heart of the conspiracy. With the help of a few new friends and an old friend he would rather forget, Jaxter will have to delve deep into some long-buried and dangerous secrets.

A "rich fantasy" (Publishers Weekly, starred review) with a family of thieves that "couldn't be more likable" (Kirkus Reviews), the Vengekeep Prophecies trilogy takes everything you thought you knew about prophecies and spins it into pure magic. Don't miss the thrilling conclusion to the series, The Grimjinx Rebellion.

Brian Farrey acquires young adult fiction for Flux. He and he alone has the power to make you an honorary Grimjinx. (You know you want it.) He lives in St. Paul, Minnesota.

Brett Helquist's celebrated art has graced books from the charming Bedtime for Bear, which he also wrote, to the New York Times–bestselling A Series of Unfortunate Events by Lemony Snicket to the glorious picture book adaptation of Charles Dickens's A Christmas Carol. He lives with his family in Brooklyn, New York.

“In an excellent, self-contained adventure, 12-year-old Jaxter Grimjinx is anxious to prove himself at the family business: thievery. Farrey’s rich fantasy hits the ground running and never lets up.”
— Publishers Weekly (starred review)

“There couldn’t be a more likeable family of thieves. This funny and serious series opener features action, twists and pleasingly original vocabulary, such as the swear ‘zoc’ (as in ‘Zoc that’) and the expression ‘bangers,’ which means, roughly, ‘awesome.’ Bangers!”
— Kirkus Reviews

“Enticing, lively, and wholly engrossing, this book takes us on a journey as twisty and treacherous as an old castle staircase--where danger lurks behind every bend, nothing is ever as it seems, and things can always, always get worse.”
— Anne Ursu, Award-winning author of Breadcrumbs

“Humorous and inventive. I’m eager to read the second in the trilogy!”
— Joseph Delaney, Bestselling author of The Last Apprentice series