The Myth of Mental Illness: Foundations of a Theory of Personal Conduct (Paperback) 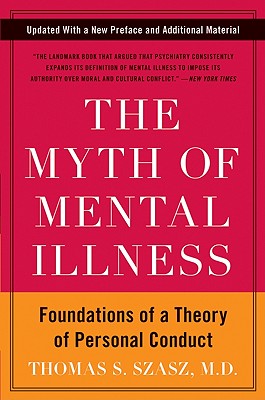 “The landmark book that argued that psychiatry consistently expands its definition of mental illness to impose its authority over moral and cultural conflict.”  — New York Times

The 50th anniversary edition of the most influential critique of psychiatry every written, with a new preface on the age of Prozac and Ritalin and the rise of designer drugs, plus two bonus essays.

Thomas Szasz's classic book revolutionized thinking about the nature of the psychiatric profession and the moral implications of its practices. By diagnosing unwanted behavior as mental illness, psychiatrists, Szasz argues, absolve individuals of responsibility for their actions and instead blame their alleged illness. He also critiques Freudian psychology as a pseudoscience and warns against the dangerous overreach of psychiatry into all aspects of modern life.

Thomas S. Szasz, M.D., is professor emeritus of psychiatry at the State University of New York in Syracuse, where he has taught since 1956.

“The landmark book that argued that psychiatry consistently expands its definition of mental illness to impose its authority over moral and cultural conflict.” — New York Times

“Szasz’s radical views on mental illness and drug addiction have been presented with great consistency and courage . . . I predict that Dr. Szasz’s work and thought will once again come to the fore: he takes the long view.” — Will Self, The Times (London)

“Quite probably, Szasz has done more than any other man to alert the American public to the potential dangers of an excessively psychiatrized society.” — Atlantic Monthly