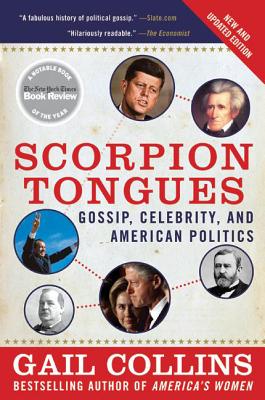 By Gail Collins
$14.99
In Stock at Publisher - Available to Ship to Your Home

From Thomas Jefferson to William Jefferson Clinton, Scorpion Tongues is a popular history of gossip in American politics. Complete with wickedly delightful anecdotes of major and minor politicians and entertainers over the last 200 years, Gail Collins examines the evolving relationship between politicians and the press and the blurring of the lines between politicians and celebrities. Supported by extensive research and written with an entertaining flair, she speculates on how gossip reflects the current moral compass of the time, noting how a rumor, like an unpredictable summer tornado, can flatten one reputation while a similar story passes over another with hardly a rustle. "Hilariously readable" (The Economist), Scorpion Tongues offers sinful scandals and mild hearsay for every taste.