The Mind and the Brain: Neuroplasticity and the Power of Mental Force (Paperback) 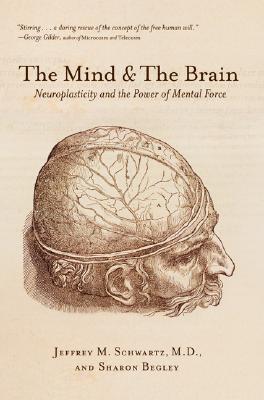 A groundbreaking work of science that confirms, for the first time, the independent existence of the mind–and demonstrates the possibilities for human control over the workings of the brain.

Conventional science has long held the position that 'the mind' is merely an illusion, a side effect of electrochemical activity in the physical brain. Now in paperback, Dr Jeffrey Schwartz and Sharon Begley's groundbreaking work, The Mind and the Brain, argues exactly the opposite: that the mind has a life of its own.Dr Schwartz, a leading researcher in brain dysfunctions, and Wall Street Journal science columnist Sharon Begley demonstrate that the human mind is an independent entity that can shape and control the functioning of the physical brain. Their work has its basis in our emerging understanding of adult neuroplasticity–the brain's ability to be rewired not just in childhood, but throughout life, a trait only recently established by neuroscientists.

Through decades of work treating patients with obsessive–compulsive disorder (OCD), Schwartz made an extraordinary finding: while following the therapy he developed, his patients were effecting significant and lasting changes in their own neural pathways. It was a scientific first: by actively focusing their attention away from negative behaviors and toward more positive ones, Schwartz's patients were using their minds to reshape their brains–and discovering a thrilling new dimension to the concept of neuroplasticity.

The Mind and the Brain follows Schwartz as he investigates this newly discovered power, which he calls self–directed neuroplasticity or, more simply, mental force. It describes his work with noted physicist Henry Stapp and connects the concept of 'mental force' with the ancient practice of mindfulness in Buddhist tradition. And it points to potential new applications that could transform the treatment of almost every variety of neurological dysfunction, from dyslexia to stroke–and could lead to new strategies to help us harness our mental powers. Yet as wondrous as these implications are, perhaps even more important is the philosophical dimension of Schwartz's work. For the existence of mental force offers convincing scientific evidence of human free will, and thus of man's inherent capacity for moral choice.

Jeffrey M. Schwartz M.D. is an internationally-recognized authority on Obsessive-Compulsive Disorder and is the author of the bestseller Brain Lock. He is a Research Professor of Psychiatry at the UCLA School of Medicine.

Award-winning writer Sharon Begley is the science columnist for the Wall Street Journal; before that she was senior science writer for Newsweek. She lives in Pelham New York.