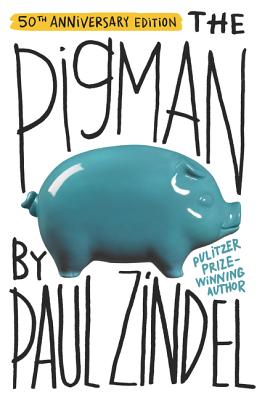 Join the millions of readers who have discovered The Pigman, the beloved bestselling young adult classic from Paul Zindel, the Pulitzer Prize-winning author of The Effect of Gamma Rays on Man-in-the-Moon Marigolds.

The Pigman is the perfect read for fans of modern classics like The Outsiders by S. E. Hinton and Thirteen Reasons Why by Jay Asher.

When high school sophomores John and Lorraine made a prank phone call to an elderly stranger named Angelo Pignati, what starts as a practical joke quickly turns into a friendship that changes all of their lives forever. But when their friendship ends in tragedy, the only way for John and Lorraine to find peace is to write down their friend's story—the true story of the Pigman.

“Headline news…remarkable…Zindel has written a story that will not be denied.” —Publishers Weekly

Paul Zindel (1936-2003) was born and raised on Staten Island in New York. After teaching high school science for several years, he decided to pursue a career as a playwright. His first play, The Effect of Gamma Rays on Man-in-the-Moon Marigolds, won the Pulitzer Prize for Drama. Shortly thereafter, he wrote his first novel for young adults, The Pigman, which has gone on to sell millions of copies. Mr. Zindel wrote more than fifty books over the course of his life, including the popular My Darling, My Hamburger; The Pigman’s Legacy, a sequel to The Pigman; and the autobiographical The Pigman and Me.

“Headline news…remarkable…Zindel has written a story that will not be denied.”
— Publishers Weekly

“This is a shocker of a book. Startling and truthful and vivid.”
— Young Readers’ Review