His Brother's Keeper: A Story from the Edge of Medicine (Hardcover) 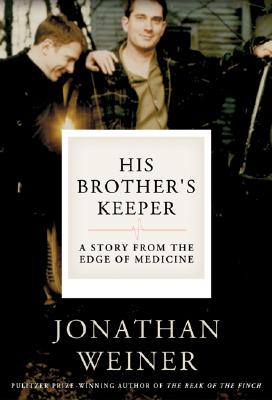 By Jonathan Weiner
$26.95
This book is out of stock indefinitely, unable to order at this time.

From Jonathan Weiner, Pulitzer Prize-winning author of The Beak of the Finch, comes His Brother's Keeper -- the story of a young entrepreneur who gambles on the risky science of gene therapy to try to save his brother's life.

Stephen Heywood was twenty-nine years old when he learned that he was dying of ALS -- Lou Gehrig's disease. Almost overnight his older brother, Jamie, turned himself into a genetic engineer in a quixotic race to cure the incurable. His Brother's Keeper is a powerful account of their story, as they travel together to the edge of medicine.

The book brings home for all of us the hopes and fears of the new biology. In this dramatic and suspenseful narrative, Jonathan Weiner gives us a remarkable portrait of science and medicine today. We learn about gene therapy, stem cells, brain vaccines, and other novel treatments for such nerve-death diseases as ALS, Alzheimer's, and Parkinson's -- diseases that afflict millions, and touch the lives of many more.

It turns out that the author has a personal stake in the story as well. When he met the Heywood brothers, his own mother was dying of a rare nerve-death disease. The Heywoods' gene therapist offered to try to save her, too.

"The Heywoods' story taught me many things about the nature of healing in the new millennium," Weiner writes. "They also taught me about what has not changed since the time of the ancients and may never change as long as there are human beings -- about what Lucretius calls ‘the ever-living wound of love.'

"The Heywoods mean the whole story to me now: an allegory from the edge of medicine. A story to make us ask ourselves questions that we have to ask but do not want to ask. How much of life can we engineer? How much is permitted us?

"What would you do to save your brother's life?"

Jonathan Weiner is one of the most distinguished popular-science writers in the country: his books have won the Pulitzer Prize, the National Book Critics Circle Award, and the Los Angeles Times Book Prize. His writing has appeared in The New Yorker, Slate, Time, The New York Times Magazine, The Washington Post, The New Republic, Scientific American, Smithsonian, and many other newspapers and magazines, and he is a former editor at The Sciences. His books include The Beak of the Finch; Time, Love, Memory; and His Brother's Keeper. He lives in New York, where he teaches science writing at Columbia University's Graduate School of Journalism.