The Best of Me (Signed) 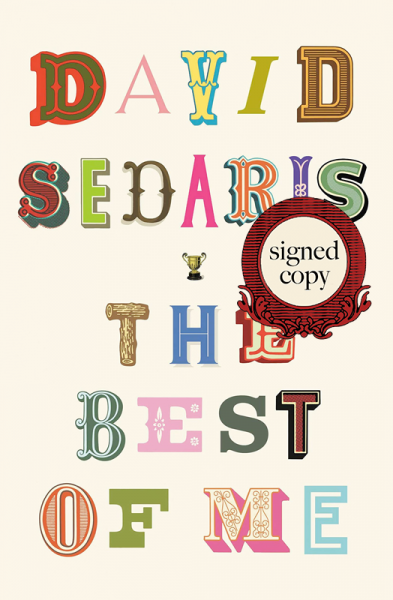 “Genius… It is miraculous to read these pieces… You must read The Best of Me.” —Andrew Sean Greer, New York Times Book Review
For more than twenty-five years, David Sedaris has been carving out a unique literary space. A Sedaris story may seem confessional, but is also highly attuned to the world outside. It opens our eyes to what is at absurd and moving about our daily existence. And it is almost impossible to read without laughing.

Now, for the first time collected in one volume, the author brings us his funniest and most memorable work. In these stories, Sedaris shops for rare taxidermy, hitchhikes with a lady quadriplegic, and spits a lozenge into a fellow traveler's lap. He drowns a mouse in a bucket, struggles to say “give it to me” in five languages, and hand-feeds a carnivorous bird.

But if all you expect to find in Sedaris's work is the deft and sharply observed comedy for which he became renowned, you may be surprised to discover that his words bring more warmth than mockery. Nowhere is this clearer than in his writing about his loved ones. Here, Sedaris explores falling in love and staying together, recognizing his own aging not in the mirror but in the faces of his siblings, losing one parent and coming to terms—at long last—with the other.

Full of joy, generosity, and the incisive humor that has led David Sedaris to be called “the funniest man alive” (Time Out New York), The Best of Me spans a career spent watching and learning and laughing—quite often at himself—and invites readers deep into the world of one of the most brilliant and original writers of our time.

DAVID SEDARIS is the author of eleven previous books, including, most recently, The Best of Me, A Carnival of Snackery and Theft by Finding. He is a regular contributor to The New Yorker and BBC Radio 4. In 2019, he was inducted into the American Academy of Arts and Letters. He is the recipient of the Thurber Prize for American Humor, Jonathan Swift International Literature Prize for Satire and Humor, and the Terry Southern Prize for Humor.